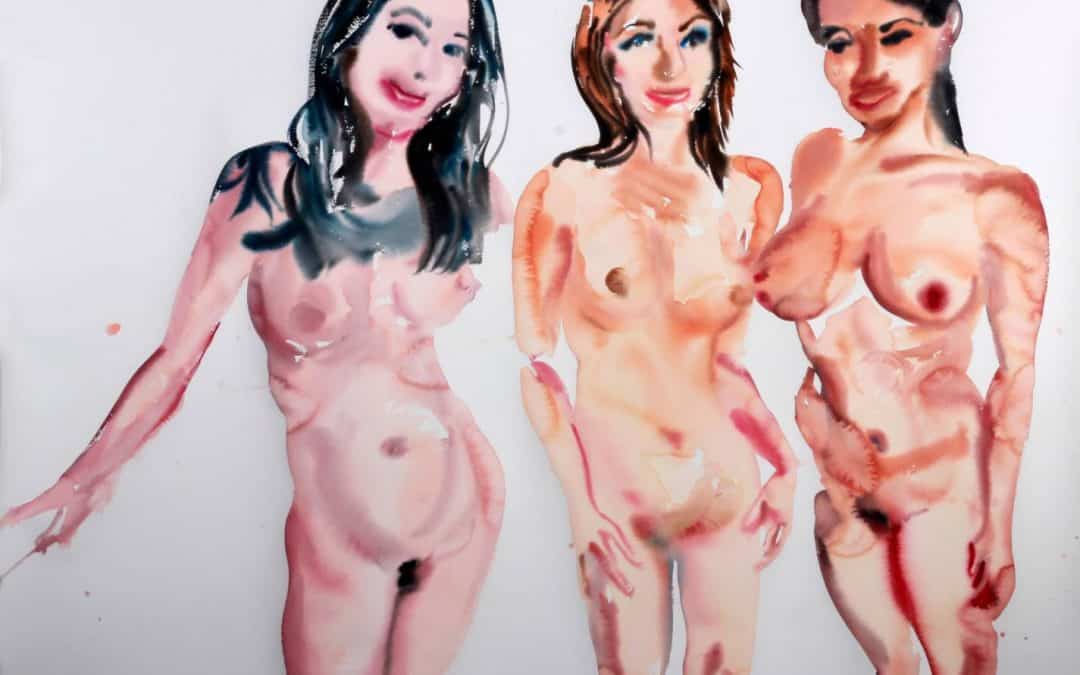 Paradise Go Go Bar, Tawan Wattuya’s solo exhibition, is the latest showcase for this young-looking internationally-renowned Thai artist. Tawan commenced his artistic career with oil and acrylic paintings in a style of bold vivid colours, intense and passionate harsh brush strokes before turning to watercolour and developed his unique style of fluid and intuitive boundlessness that defies any restraints.

His works reflect upon his observation of social phenomena presented in various forms: printed and online news, television, social media, political events, gossip and scandal, even fads, funny and trivial incidents as well as the dark corner of life most people pretend to be disgusted by (but secretly seek after) like sexual pleasure. All of these occurrences are depicted in his paintings with satirical humour and sharp wit, which undoubtedly rockets Tawan to be well-known in the art circles.

Tawan has also immersed himself in portrait painting. As an excellent observer, he makes use of his immediate precise watercolour technique to capture intriguing human faces as if to keep them for later scrutiny or imprint them in his memory. His portraits range from friends and familiars, public figures (both Thai and foreigners), artists, actors and actresses, singers, celebs, superstars, athletes, policemen, soldiers and politicians to commoners he met while traveling from place to place, villagers, construction workers and people on the fringe of society—culprits, criminals, political prisoners, displaced people, refugees and the deceased from political violence.

Tawan does not use realistic approach in his portraits. Instead, he grasps particular characteristics of individual persons and their distinct contexts, then conveys them freely with rare sensitivities in order to portray the essence of human personalities in his portraits.

In this latest exhibition, Tawan examines deeply into the infamous nightlife of Thailand. Patpong is one of the most well-known red-light districts in the world. Its disrepute was encapsulated in a popular Thai song: If you asked any farang (represented by a generic name “Tom” in the lyrics), “Tom, Tom, where you go last night?” you only got one answer. Patpong is considered a lascivious Sin City in the eyes of self-righteous Thais.

Tawan blatantly mirrors in his paintings the fleshly lives of Patpong as expected by the audience who are familiar with his style. In the main collection of this exhibition, he employed his watercolour technique to apprehend the sex workers in their mundanity. The portraits are presented to us in an arrangement not dissimilar from exemplary employee photo board in a business company.

Tawan’s paintings induce us to see that essentially these people in the shadow of the night are just making their living as ordinary people do.

The exhibition’s venue is all the more interesting since it is not a clean white-walled gallery or a respectable art institute. It is a go-go-bar-cum-art-space on a certain floor of Patpong Museum. The museum itself extends a surprising welcome for any visitors to see Patpong in a different light other than sex industry.

Attending Tawan’s Paradise Go Go Bar exhibition is not only an eye/mind-opening experience, but also a step to get beyond deep-rooted bias and to discover different dimensions of a scandalous nightlife district like Patpong. It is Patpong that you have never seen before.